Living in a Passivhaus: Summer 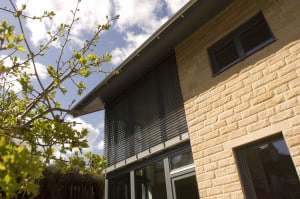 The original design outside the solar space was going to be a brise-soleil – (a permanently fixed structure for summer sun shading) with a pergola to provide summer shading downstairs. But we decided against the brise-soleil idea because it reminded us of prison bars and we wouldn’t have any control over it. Instead we had some electronic external shutters installed which work beautifully you can bring the shutters all the way down, have them half open (so you have lovely dappled light) or all the way up. In winter as the sun gets weaker we don’t need the blinds. Now we’ve lived through the summer in the house we also realise that we don’t need the pergola for shading. We might still put one out there – but it would be as an attractive feature rather than a necessity. It’s the same with the greenery. We’ve always wanted to live in a conservatory with ‘wrap-around’ foliage – which is why we were growing the tomatoes and cucumber inside the solar space – and then we realised that we don’t need that because all the greenery is out there – through the massive window of the solar space.

CO2 probably doesn’t build up too much in a Passivhaus due to the MVHR system supplying adequate fresh oxygen-rich air so it’s interesting to see what, if any, impact this has on the plants in the house.

Growing tomatoes in the solar space hasn’t really worked – they would be fine in a greenhouse but in an airtight Passivhaus the green fly have nowehere to go …When the Mayor of Kirklees was here opening the house I could see people swatting the greenfly away, so we’ve given up on them – they also didn’t seem to grow many tomatoes. We grew some cucumbers as well and they fruited little tiny cucumbers which then just shrivelled. Normally in a greenhouse you’d be spraying all the time but obviously we didn’t want to do that in the house. The banana plant’s fine though and the passion flower vine is doing well and as grown around the internal space metal structure (which will ultimately contribute to summer shading).
We’ve never had an orchid flower before we’ve found that orchids seem to do well in Passivhauses as is the cyclamen seems to love it in here – it just keeps on flowering.

So gardening-wise it’s still a matter of finding out what works and what doesn’t work in the house.

Air quality
Air cleanliness was one of the things that appealed to us about Passivhaus and we were also keen to use natural paints and natural materials in the house. We painted the house ourselves using natural paints – and because the paint didn’t off-gas we didn’t have to open windows while we were decorating .

We chose some clay plaster for the internal walls, which is supposed to take in excess moisture and then release it when the atmosphere gets too dry etc. If there are peaks and troughs of humidity – the clay plaster is supposed to act a buffer for this. This was recommended to us by a guy in Austria who was a plasterer and his children were asthmatic. It has an attractive finish as well and doesn’t need to be painted so it fitted our low maintenance criteria. In terms of condensation in the house, we’ve noticed that when you have a shower – you get a certain amount of condensation and steaming up on the mirrors etc – but it clears by the time you leave the bathroom – probably an indicator of the effectiveness of the MVHR

It was always on our agenda to have a house that was going to be easy to clean. We’re terrible at cleaning – one of the plusses of having the Green Building Store training day visits is that forces us to clean. Thanks to the flooring and smooth surfaces in an hour and you’re done –it’s very easy to clean – the flooring we’ve chosen doesn’t trap the dust (bamboo in the sitting room, wood and stone elsewhere).  A comfortable and dust-free environment is also part of the Passivhaus philosophy.

4 responses to “Living in a Passivhaus: Summer”