For a number of reasons, we are going down the Elemental route towards getting EnerPHit certification.  One of the main factors in this decision was some structural issues regarding the foundations and barn walls which only emerged once we got on site and which had a big knock on effect on the final layout of the project.

The barn’s inadequate foundations, revealed by a later structural survey, meant that , instead of having a level ground floor in the barn, as originally intended, we had have a two-level ground floor – with a raised kitchen (at the end of the barn where digging deeper  foundations was going to be difficult). 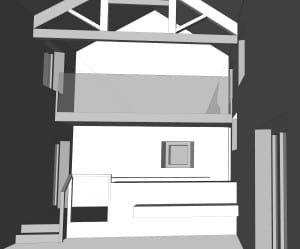 Inside the barn, looking towards the kitchen area

The knock-on effect of this was that we had to dispense with the idea of putting in a first floor above the raised floor kitchen. Originally we were going to have a substantial first floor section, with a meeting room at one end and some more rooms above the kitchen, linked by a walk way between the two sections of first floor. However, because we had to raise the kitchen floor area we weren’t able to do that and ended up with just the first floor meeting room at one end of the barn.
An immediate knock-on effect of not being able to have a bigger first floor area has been that we couldn’t get the PHPP modelling to get down to our normal EnerPHit certification levels (25 KwH/m2/year) as we didn’t have enough ‘treatable floor area’ for the height of the majority of the building’s ceilings. Because of this lack of floor area we then had to swap the usual PHPP route to EnerPHit certification for the ‘Elemental method’.
To achieve EnerPHit certification using the Elemental approach, every element of the building has to reach certain criteria of U value. The walls the roof, the floor, the windows, the doors..everything has to reach certain levels. Whereas if you are certifying using the PHPP route you can play around with the different elements, for example compensating for higher U values in the windows with lower U values in the walls. So far as I can understand the Elemental route is for exactly this kind of retrofit where you can’t control certain aspects – eg where you haven’t got good orientation to the sun, where you are stuck with the actual window positions and sizes and/or have high ceiling height (and reduced level of treatable floor area).

For all that the double height ceiling has created problems, ultimately the project is a barn conversion to create a large community space and a large ceiling actually suits that.

The ‘Elemental’ method of certification

EnerPHit certification usually requires a space heating demand ≤ 25 kWh/(m²a).
However, as discussed above, certification can be issued alternatively if the criteria for individual building components are met.

1)    External wall and storey ceiling above outside air

More information and guidance on the EnerPHit ‘Elemental method’ is at:
http://www.passiv.de/old/01_dph/Bestand/EnerPHit/EnerPHit_Criteria_Residential_EN.pdf 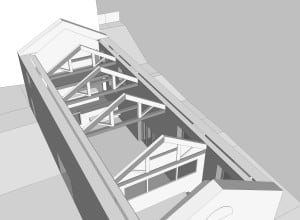 Looking down from NW corner, roof hidden but wall thicknesses showing cavity between the old wall and the new

One of the striking elements in the above list is the unusually weak requirement for internal insulation (ie a U value of 0.35W/m2K). We are guessing that the requirement is not as stringent as other elements because of concerns regarding interstitial condensation around internal insulation. In our case, we have got around this through our use of a ventilated cavity and so are able to have a ‘belt and braces’ insulated wall of 310mm which will result in a much improved U value than that required. It is interesting to note that although the Elemental route could have resulted in a ‘tick box’ approach to achieving certification, we have chosen to go for a building with better insulated walls that we know will perform well.

Consquences of using the Elemental approach

The EnerPHit elemental method requires that each element of the build performs to a certain standard and so has forced us to specify stand alone Passivhaus certified windows . As a result, we went for Passivhaus certified windows  which were slightly more expensive than the non-certified option we had originally specified  and had a longer lead time, so our progress has not been as fast as we originally programmed.

Apart from the Elemental criteria, getting EnerPHit certification is similar to all Passivhaus certification and we still need to prove that we’ve built it the way we’ve designed it.

We’ll still be: modelling the building in PHPP (and predicting space heating consumption); showing that we’ve used the right materials with the right lamda values; and doing Therm calculations and supplying detailed drawings of junctions etc. We’re aiming for certification in September/ October this year, all being well.