Reflections on the 2018 International Passivhaus Conference

Green Building Store Director Chris Herring is just back from the 2018 International Passivhaus Conference in Munich. Below he shares his reflections on the conference… 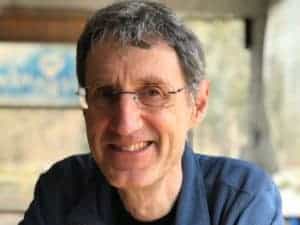 The theme of this year’s conference in Munich was “Passivhaus, it’s worth it”. This was picked up by Wolfgang Feist in his plenary introduction, where he particularly focussed on affordable housing, where Passivhaus offers very clear advantages. This has also been a theme picked up by the Passivhaus Trust over the last couple of years, in its successful promotion of Passivhaus social housing with Local Authorities and Housing Associations. It is very clear that Passivhaus offers long term benefits for affordable and social housing. It is also now clear that the capital premium is rapidly decreasing, as Wolfgang’s analysis demonstrated to the region of 3 – 6%. Perhaps even more interesting, as Nick Grant, Technical Director of the Passivhaus Trust demonstrated in his challenging presentation, is the opportunity through true value engineering and intelligent design to reduce this to zero. Putting these ideas together with the rapidly improving supply chain on display at the Conference, we now have a real opportunity to remove or at least minimise this perceived barrier to uptake.

Positivity in the face of climate change

Any reflection on Passivhaus, and what it is trying to achieve, must inevitably be set against the backdrop of the ever more urgent need to address CO2 emissions and climate change. With global emissions still rising, and post Paris projections of a terrifying 3C+ of warming in the pipeline the need for change could not be more pressing. The point was elegantly made by Elrond Burrell in his plenary presentation on the second day, highlighting both our current plight in the so-called Anthropocene, but also the positivity of working with the Passivhaus solution. We need good news stories, and Passivhaus is certainly one, reflecting human ingenuity in the face of immense challenges, albeit the take up is frustratingly slow. So I was particularly taken with this Buckminster Fuller quote framing the conference from Christine Degenhart, President of the Bavarian Chamber of Architects in her plenary address: “I am enthusiastic over humanity’s extraordinary and sometimes very timely ingenuity. If you are in a shipwreck and all the boats are gone, a piano top buoyant enough to keep you afloat that comes along makes a fortuitous life preserver. But this is not to say that the best way to design a life preserver is in the form of a piano top. I think that we are clinging to a great many piano tops in accepting yesterday’s fortuitous contrivings as constituting the only means for solving a given problem.”

We had a good delegation of Brits at the conference this year – I was told maybe 100. I don’t know how others fared, but I found there was still a good deal of ongoing amusement, or continuing incredulity over Brexit. Pretty easy at events I was chairing to raise a laugh at its mention. However, in comparision with the US delegation, I guess Brexit discomfort was minor. Trump simply trumps it all. The reason I guess why when we heard that “Pittsburgh stands with the world and will follow the Paris agreement”, there was spontaneous applause. 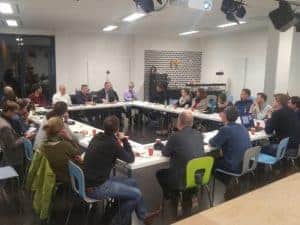 After over 10 years of attendance at conference, and as Chair of the council of affiliated organisations around the world, much of my time is inevitably taken up with valuable networking with colleagues. However this year I made a particular effort to get to some of the Chinese presentations. This really does put the rest of the world in perspective. Where we work on buildings and building complexes or possibly at scale in city areas such as Heidelberg Bahnstadt, they are working at a completely different scale. We saw huge certified Passivhaus factories being built dedicated to Passivhaus windows. And perhaps most startling was Gaobeidian railway city. This is 1.2 million square metre new city, including high speed rail link to Beijing, dedicated factories to produce the Passivhaus components needed and everything certified Passivhaus. The scale, and speed of take up is truly mind boggling, but given the size of China’s construction sector, building 23 million new apartments a year, as Wolfgang Feist reminded us, this is desperately needed. Which maybe should have made it no big surprise that next year’s international conference was moving outside the German speaking countries for the very first time and going to….Gaobeidian.

Product innovation was well featured at this year’s conference, and given my interest in windows and all things glazing, I got quite excited about a new glazing innovation. Sadly, my conclusion that we have reached a plateau in glazing performance around Passivhaus standard triple glazing was not challenged. The new vacuum glazing from South Korea was indeed a step on from current vacuum glazing, but it is clear that the technology is a long way from challenging current best practice. Ventilation innovations were more interesting however. The component awards this year were for ventilation systems for small apartments – something that can be disproportionately expensive. I shall certainly be following up on some of the innovations which appeared to have real promise. So now to run them past our ventilation experts to see what they think! 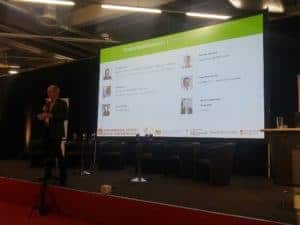 At the end of two days of workshops, a lot of networking and too-late nights, I still managed to make some notes in the final plenary discussion. I thought that two of these summed up a lot of our ongoing challenge. From Simone Kreutzer of IG Passivhus Sverige – we need to “start speaking the language of the common people” and to “change our way of speaking”. Communication is all, and technical language won’t do it. As Rob Bernhardt of Passive House Canada said, in a meeting I attended, we need to reframe the way we present Passivhaus. We know that it works, and there appears to be nothing else that does. So it should be for others to justify why they would consider any other route, not for us to justify Passivhaus. However I will leave the final comment from the plenary discussion to Spanish Passivhaus pioneer, Micheel Wassouf, ”the best marketing campaign is the buildings that have been built.” This remains as important as ever. Having more buildings on the ground has the biggest potential to communicate. We know what we have to do.

3 responses to “Reflections on the 2018 International Passivhaus Conference”