The ULTRA range of triple glazed timber windows and doors was the obvious choice for us. The U-values were in line with our needs and plans for Passivhaus certification. The support from Green Building Store was always first rate.

Compacfoam is ideally suited for this issue. Green Building Store’s design team helped create a detail which resolved any cold bridging issues along the door openings.

Sustainable building specialists PYC Group are putting their principles into practice having built their own certified Passivhaus office in Welshpool, Powys. The 220m2 office building was constructed using their own timber frame system to a budget of £350,000. 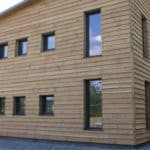 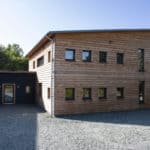 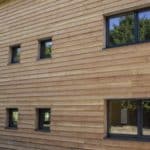 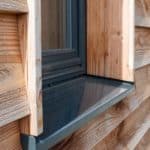 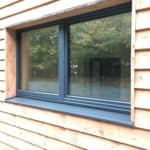 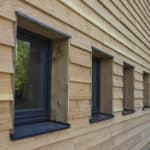 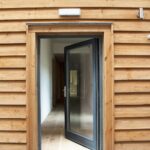 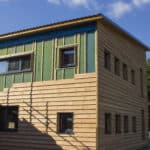 The office was built in timber frame by PYC group using an I-beam system, with Warmcel recycled newspaper insulation within the timber frame.  The panels were made in the company’s adjacent factory. Timber features heavily in the internal spaces of the office  reflecting  a focus on reducing the embodied CO2 of building materials at the project.

The office achieved an airtightness of 0.5 ACH (n50) and has  a space heating need of 14 kWh/m2/year. There is no conventional central heating system in the office, with a small portable 1kW portable electric heater providing all space heating and  hot water provided by an instantaneous electric water heater and shower. Estimated space heating costs are £47 per month.

Jasper Meade, Director at PYC Group said: “We felt that building the offices to Passivhaus standards would exemplify the work that we do. There were other major benefits including being cheap to run, comfortable and healthy for workers.”

The windows and doors were sealed using Pro Clima airtightness tapes, delivering an overall window U value of 0.79 W/m2K

Rich Hibbert, Technical Manager at PYC Group, said: “The ULTRA range was the obvious choice for us. The U-values were in line with our needs and plans for Passivhaus certification. The support from Green Building Store was always first rate.”

Compacfoam 200 insulation, from Green Building Store, was used as a thermal break at the door thresholds.