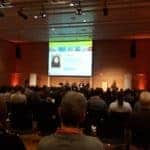 We went to a number of talks and seminars and enjoyed the informal meet-ups in the evening as well. What I found actually the most valuable part of the Conference  this time was meeting up with UK people that you don’t see from year to year and you’re thrown in a situation where you get to talk to people in far more depth than you would normally. 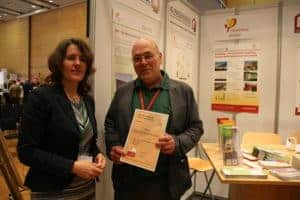 I was also delighted and honoured to pick up my Passivhaus Consultant 5 year renewal while in Vienna which I received from Suzanne at the Passivhaus Institut. Luckily my teaching on the AECB CarbonLite CEPH course and attendance on numerous events and courses helped me gain the credits I needed without the need for lots of additional report writing.

I enjoyed the international aspect of the talks. There was a good talk on an EnerPHit project in India, as well as  Spanish and Italian retrofit projects. I tried to stick to attending talks on  the retrofit/ EnerPHit side of things. It was encouraging to know that the UK is as advanced technically here as our continental counterparts – we have caught up. For example, internal wall insulation was still being discussed as the big risk/ question in retrofits and it felt like here in the UK we’re as advanced as anybody in our understanding of this. However, there was a talk by a German physicist who reckoned that you could use greater thickness of insulation internally than is normally supposed. He was talking particularly about wood fibre IWI. He was saying that the more IWI you use the condensation will happen gradually through the bulk of it..so there won’t be mould and there’s less risk. That was new. All of this obviously depends on where in the world it is, what exposure there is, what the climate is like.  Here in Yorkshire we’ve got a very humid wet climate so it is a big issue here. 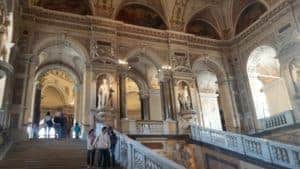 On Sunday Chris and I took the day off to talk business. We had a lovely day exploring Vienna’s parks and buildings. The Austro Hungarian Empire had certainly been something else – the buildings exuded power – it was very grand!

Chris went off later to an IPHA meeting. I had a quick tour of the Natural History Museum and then the Architectural Museum, which was really interesting to me from the social side of things. It was quite a small museum and you walked around chronologically from Art Nouveau and Arts and Crafts to Post WW1 when Vienna was known as ‘Red Vienna’ and there had been a boom in building proletarian apartment blocks such as Karl Marx Hof. Then this was superseded by architecture of the Third Reich which went back to very traditional Alpine designs. We then moved through post WW2 reconstruction into modernity. The Modernist style of central European design works well with Passivhaus. 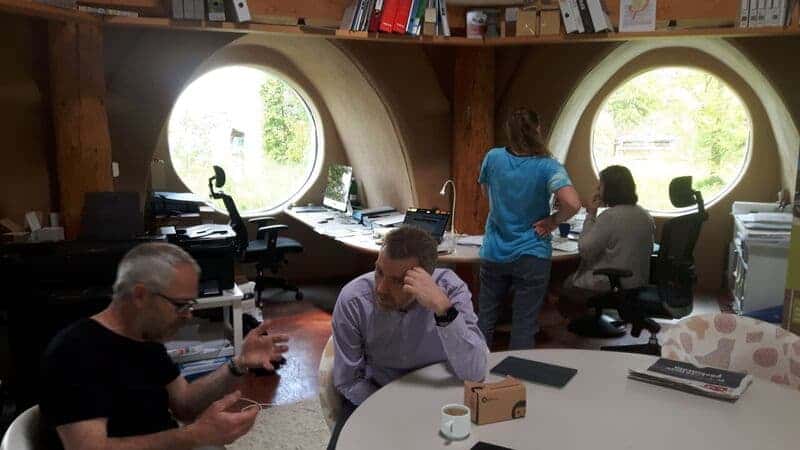 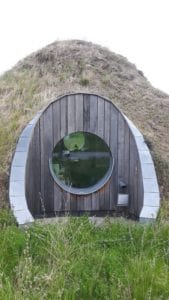 ick and I  set off to Bratislava in Slovakia. The weather was getting better all the time. We were the guests of Bjorn Kierulf and Zuzana Kierulfova, architects at Createrra and good friends of Nick’s and Chris’. They operate from an amazing Hobbit-like straw domed office – lovely!. We were made to feel really welcome. They’ve taken over an old school in their village and turned it into a training centre for clay plastering and straw construction . They’ve converted part of the school into accommodation so there’s a dormitory for people attending the courses. It’s a kind of  Mecca for natural building in Slovakia. 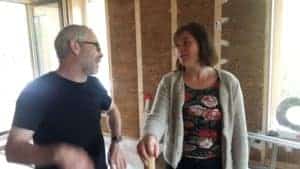 First of all we went to see one of Zuzana’s projects built using Ecococon, which is a prefabricated straw bale panel walling system, with  features such as foam glass aggregate under the floor and  clay rammed earth floor. The house was a very simple one storey building with a monopitch roof, which will be clay plastered inside and timber clad outside. After visiting that, we returned to the school and celebrated Zuzana’s surprise birthday party..

We went to see four of Createrra’s Passivhaus projects, starting with a large detached house with green roof (also made with Ecococon) built half on stilts because it was on a very steep piece of land, Beautiful . 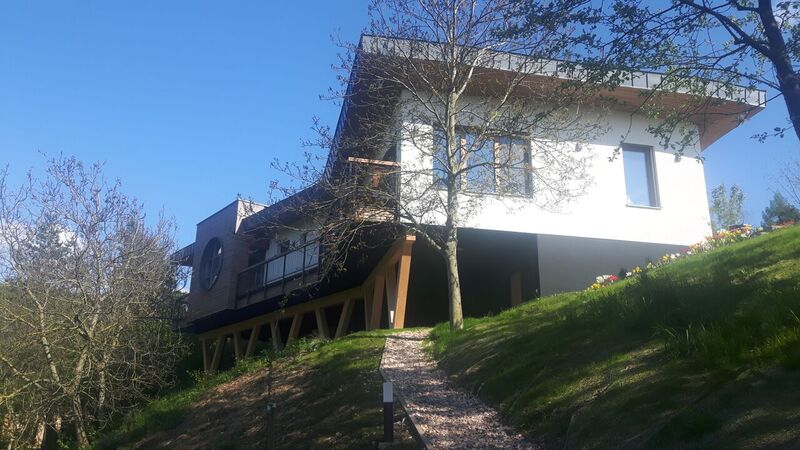 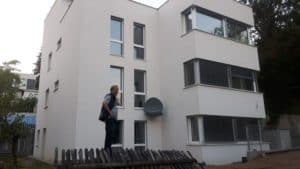 We also saw a retrofit of an apartment block in Bratislava itself which had been  made into three flats. That was done on a tight budget with a selfbuilder client who’d done a lot of the physical work himself. I really was impressed by Bratislava – it was very modest. I would recommend it. I really did like Slovakia. The Passivhaus community in Slovakia seems to be quite strong relative to its 5 million inhabitants. 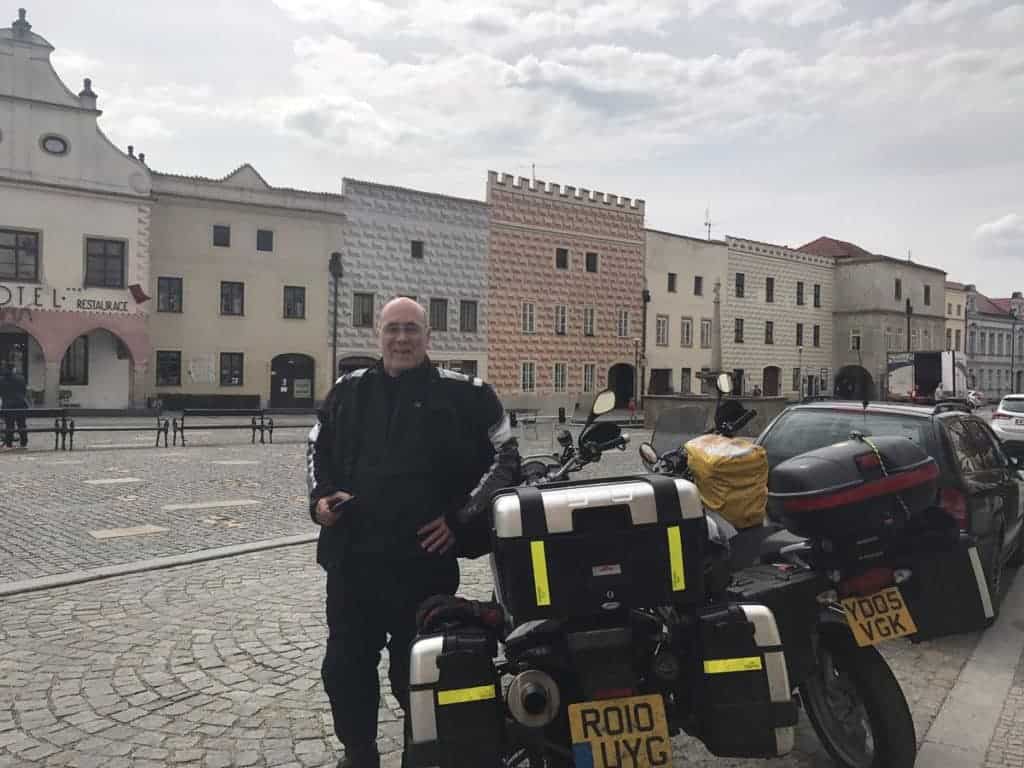 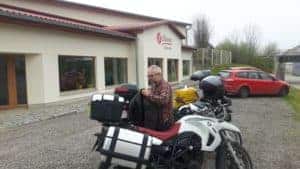 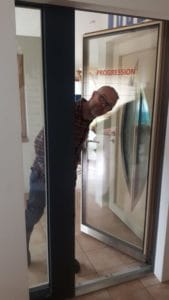 We then took 4 days riding back through Slovakia and  the Czech republic. Unwittingly on our first day we rode through Slavionice where our PROGRESSION window suppliers Slavona are based . We had just stopped for a break in Slavonice when I realised that I had been there before. I got off my bike when I realised that I recognised this place and had stayed there before!. So we went off to see the factory which was luckily still open. We had a quick tour of the factory which was impressive. So that was a nice surprise and coincidence.

We had a fantastic ride through Bohemia up into the mountains and into Germany through the conifer forest. We didn’t have to go on the Autobahn. It was a lovely easy journey  after our snow experience. 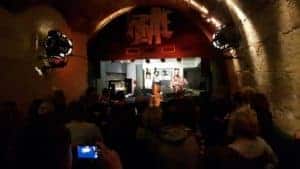 We ended up in Nuremburg which of course we know a bit because that was where I went to my first Passivhaus conference in 2008, nine years ago. We found a great jazz club and had a great night that was nothing to do with Passivhaus. It was an entirely Passivhaus-free day, as were the next three days.

We had a hard days ride on Autobahns but all culturally interesting. There was mile after mile of civil engineering projects and high speed trains whizzing by. The Germans evidently go in for infrastructure and public spending.

We got to Aachen where coincidentally there had also been a Passivhaus conference which I didn’t make myself a few years ago. We saw a French rock band and it was good to see the Germans at leisure

We went to Bruges which I found appalling ..It was very pretty and very ‘chocolate box’ but there were crowds and crowds of people.  We managed to get some presents for our spouses there including dairy free chocolate, which was quite difficult to find . I had also bought a lovely Slovakian photography book. We got to the ferry very easily at Ostend. The ‘entertainment’ on the ferry can sometimes be a bit lacklustre but this time it was taken over by a choir of 200 women who had been singing in Holland commemorating liberation day, so there was a party atmosphere and a great end to our two week long adventure.

We got back to Hull on the Sunday and I got home about middayish and mowed the lawn which was rather long after two weeks!