Nick Grant and I have recently returned from a two week motorcycle tour around Europe travelling via a circuitous route to the International Passivhaus Conference in Vienna and back. It was a great adventure taking in a lot of Passivhaus sights along the way, as well as extremes of weather.  The fact that our spouses agreed that we could go and that we managed to get a two week pass from work commitments was also miraculous in itself! 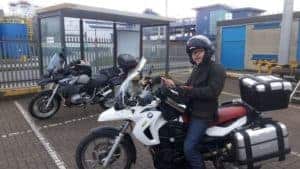 We rode to Hull on the Saturday afternoon and got on the overnight ferry. It is always a very civilised way of getting across to the continent because you go straight into the bar and have a meal, then sleep in your cabin and wake up in Belgium the next morning.

Our first port of call was Freiberg in the SW corner of Germany. I believe it’s known as the greenest German city.

It was a long day’s ride by motorway – 6-7 hours riding through Belgium and Luxembourg into France and then back into Germany. The European Union is great as there are no borders! The only way you know you’re passing through different countries is that the car license plates change letters. In Germany you notice it because there’s no speed limit on motorways and cars go at such a speed … – it’s quite frightening actually.

We stayed in the Vauban area of Freiberg with a lovely family – Christian &  Tati  and their two daughters –who live in a Passivhaus apartment. The family, who were friends of a friend of Nick’s, and they very kindly put us up for the night. 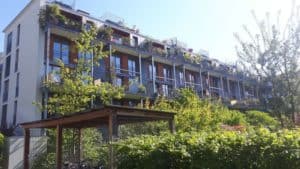 It was an area that was occupied by the French after WW2 and there were a lot of barracks buildings, some of which had been occupied by students and squatters in the seventies and eighties. It had a feel of Christiana with a few travellers’ buses around and a link to that past. There’s quite a mixture of buildings some of the barracks buildings had been knocked down, some renovated and some converted.  Where we were staying was typical of the area -in a 4 storey high apartment in small multi-family units. Funnily enough it was the first night I had ever actually spent in a Passivhaus. As we would expect, it was absolutely comfortable, the air was very fresh and it was very quiet. All the sort of things we associate with a Passivhaus. There was just one little radiator upstairs. 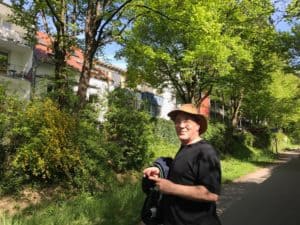 Nick and I spent the day walking around Freiburg. It was very hot. What struck me was how green everything was – the foliage, the trees and hedges. Great care had been taken to maintain the greenery of the place and it just changes the feel of a place. I was also impressed with how child-friendly the place was. Children seem to roam more freely in the way that we used to be chucked out in the 1950s and 1960s – it felt so safe. The whole place  was geared towards the pedestrian and the cyclist,  It was absolutely lovely. 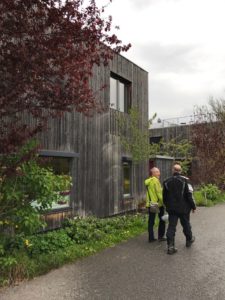 We rode over the Tyrol mountains into Austria and rode down passed Lake Constance, which is massive and actually more like a sea. We reached Wolfurt (near Bregenz) which is where Helmut Krappmeier lives. Helmut is an architect, lecturer and friend who we’ve met up with at a numerous Passivhaus events. He’s recently retired and he and his wife Umo very kindly put us up and showed us around, with Helmut riding around with us on the back of my motorbike. In the relatively small suburb of Wolfurt with a population of only 8000 people, there is a Passivhaus fire station, an EnerPHit bank, an EnerPHit school, a Passivhaus scout hut, and loads of Passivhaus housing. Bregenz University must be quite a centre for Passivhaus and environmental construction. Sustainability just seems to be taken so much more seriously over there.

The Passivhaus apartment he lived in was three storeys high with a large communal basement under the whole lot with a car park, cycle park, laundry room,  communal kids’ play room, storage rooms. It was really organised and really extensive and big. 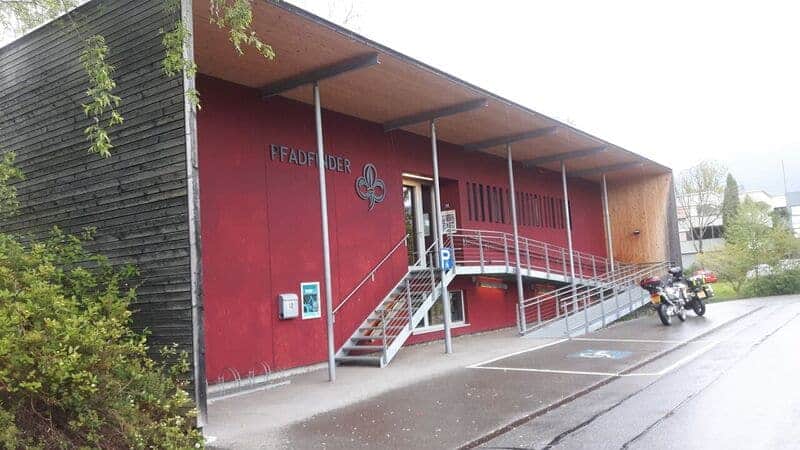 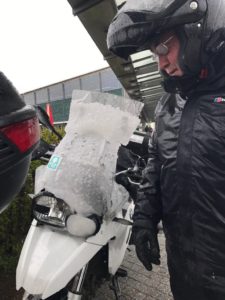 We were going to ride over the mountains but saw that the weather was not going to be that good so we decided to stick to the Autobahn instead. We went through a tunnel back into Germany and then headed  East, basically following the Danube. As we came out of the tunnel into Germany it started snowing!

We had to ride through the snow all day which was not easy. It wasn’t settling on the ground but you can’t see that well through the visor (there’s no windscreen wiper) and large quantities of  spray and snow were coming off the lorries and cars. It was freezing and very hard work. Service stations are my new church and espresso coffees were our holy communion. We stopped at every one along the route there . We must have been to 6-7 that day. Eventually we got to Salzburg and got into the hotel room and just turned on the heater to 33 degrees and put all our dripping clothes around with newspapers in boots and then left the room and went out! We didn’t really see that much of Salzburg as we were knackered and just recovering . We did find a nice traditional Austrian restaurant though that evening. 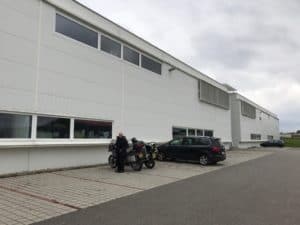 We set off the next morning to Vienna and the first day of the International Passive House Conference. But first we  stopped off at the Compacfoam factory to the North of Vienna and met my co-Director Chris (Herring) there. We were made most welcome and Florian at Compacfoam showed us around the factory, which was was really impressive. It is an incredible story how the company has developed. There are very different ways of doing business in Europe with family playing a large role. They also had a factory cat. It was lovely!

We learned of an exciting new development at Compacfoam. They have found a way of recycling old polystyrene into Compacfoam. Polystyrene manufacturers are coming under pressure because there is too much unrecyclable waste – so this offers a perfect recycling route for it..Brilliant.

Florian also took us out for meal.at another  traditional Austrian restaurant which was very  enjoyable. So there we were … in Vienna at last.