Living in a Passivhaus blog: Lessons of the winter Green Building Store

Living in a Passivhaus: Lessons of the winter 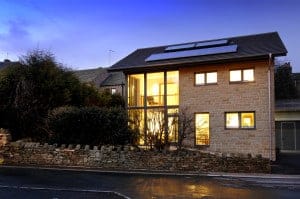 As  journalist/ blogger Mark Brinkley has said, learning to live in a Passivhaus is a bit like learning to drive a car – so we’re learning to ‘drive’ the house. The biggest area of learning has been the heating and domestic hot water.

The house’s baseline temperature was originally set at 21 degrees, so that when room temperature went below 21, the heating came on (duct heater, 2 towel rails and one radiator in the living room). However, this meant that the house sometimes got too hot as there can be a time-lag before the heating switched itself off again. I think initially we thought the house was going to be an automatic house which would run itself without us having to adjust any of the switches etc – but we’ve realised that sometimes we just need to turn the heating off manually.

When we did our January monthly meter readings we were surprised when we found that we had used 147.28 m3 of gas in the previous 2 months. However as this was just average of 73m3 per month it is still within reasonable limits for that time of year and does also include hot water usage (solar thermal panels were covered in snow for some of that time). Over December we had a really severe cold patch for about 14 days. Over that time the heating was on from 6.30am-7.00pm or sometimes 24 hours a day. Actually during some of that time we overheated the house and it became a bit uncomfortable.

During those extreme conditions in December, it was -18 outside and there was a ‘thermal  battle’ going on between the heat in the fabric and the cold outside. As had been anticipated  the coldest place in the house was in the solar space – it just felt colder up to about 6 inches in. When most of the surfaces in the house were 20 degrees C in the house the floor surface  temperature might be 17 degrees near the edge of the solar space.  In a standard house the whole house would feel cold but in the Passivhaus the cold was just creeping in..

Since then, we’ve been using the heating a lot less. Now we’re finding that we can just run it for a few hours and keep comfortable all day. We’ve been generally putting the heating on from 6.30am -9.30am (3 hours instead of 12 hours) is enough on a normal February day.  We have also now adjusted our baseline temperature down to 20 degrees. On a sunny winter’s day we don’t need the heating at all – the sun will warm the house to  21 degrees and slowly decay  so that at 10pm at night  it might go down to 20 degrees  – the solar heat we can gather has a very long decay rate away and that’s what makes it comfortable. We’re finding the temperature is fairly stable at a comfortable temperature.

Making sense of the gas usage

One of the difficulties when analysing gas consumption, is that you can’t separate the gas usage for space heating from hot water heating or from cooking. The only way to separate them out would be to get specialist meters on each aspect of gas usage, which sounds expensive and a hassle.  However, we have been cutting down the length of time we put the hot water on for and are finding that that is having a big impact on our gas consumption.

Another thing we have noticed in the winter was that the warmed fresh air sometimes became quite dry – this mostly affected Geoff at night times  especially  if he had  a cold – he would waking a couple of times with a very dry mouth. We have come up with a really easy solution to this:  a bowl of water on the dressing table or – even better due to greater surface area – leaving a moistened  tea towel  on the back of a chair overnight. This serves to releases humidity through the night and ever since we’ve done that we’ve not had one problem with over-dry air in the night etc. Needless to say, wet washing dries overnight in the house! We believe later models of the PAUL MVHR systems tackle the dryness issue by offering the option of humidity control/recovery. . More houseplants might also be another solution!

Three days before Christmas the MVHR condensate pipe froze up. It stayed frozen for 3 days – mainly because the system is housed in the garage – so we had to put an electric heater on to thaw it out. Our washing machine in the garage had also frozen earlier in the extreme conditions and the same thing could happen to condensing gas boilers. Going forward, we will need to keep an eye on the condensate pipe in sub-zero conditions and we’re looking to insulate the garage for next winter. If we had had limitless money we would probably have insulated the garage first time around.

So the winter has thrown quite a few new lessons for us to help us fine-tune the house and learn to ‘drive’ the house. We’re still learning and next year our bills will reduce again because we won’t overheat it in the winter – but you don’t know what you’re doing until you do it!