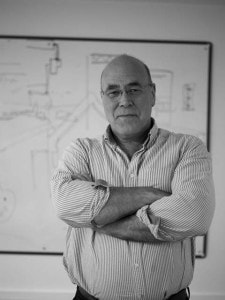 It was the fourth time I’d been to the International Passivhaus conference (and the sixth time Chris has been) and this year, for the first time, it felt that the UK practitioners were more on a level playing field with our international counterparts.

In terms of technical issues, it feels like the UK has caught up very quickly with the international community, which is grappling with the same questions as us in the UK- particularly around retrofit and internal insulation. In some respects the UK might be slightly ahead of the international community on this – which makes sense because the UK is peculiar in having so much old housing stock, individual ownership, and terraced housing, and we’re a very crowded country. The UK has got to tackle the issue of internal insulation.

Funnily enough one of the highlights for me was finding out about a new (to me) Remmers internal insulation system which might be able to answer some of these issues. It has a combination of polyurethane with, I believe, calcium compound rods. This has the potential of some natural internal wall insulation products allowing breathing and safe moisture movement, but also having a lambda value similar to polyurethane. With that sort of technology, it looks like we may be able to have safety regarding interstitial condensation along with the performance levels of polyurethane. We await to find out costs!

As I’m helping AECB CarbonLite develop a Passivhaus Tradesperson course for the UK, I was interested to see different countries’ approaches to Passivhaus construction skills training – there seems to be a lot of variety both in length of courses and also who the course is pitched at. Lots to mull over.. 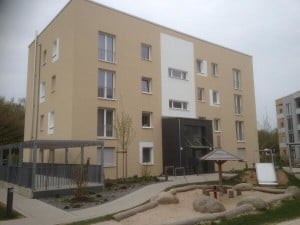 One of the nicest and most impressive parts of the conference was a speech given by the chairman of ABG – a German housing association which manages 20,000 units. They’ve decided – on purely economic grounds – that everything they do from here on in is Passivhaus. Apparently they have people queuing up to take on tenancies with them. 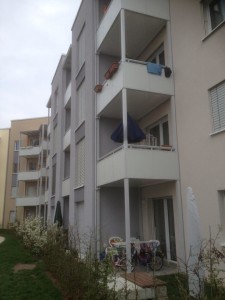 I got to see a number of projects whilst in Frankfurt, including one of the ABG’s schemes. I’m really sold on the German crisp functional minimal style of architecture, although some find it too austere. I saw a very smart retrofit scheme with multi-occupancy flats. It was interesting to see the use of balconies that were structurally independent of the thermal envelope. 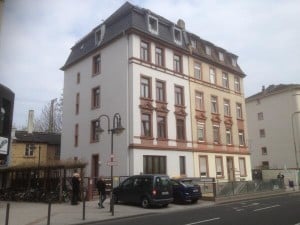 Another project was a retrofit by a private landlord of a block of a semi-detached building built in 1905. It was five storeys high and split into 4 apartments and had insulated externally on the gable and rear walls but internally on the front facade to maintain the historic appearance. It wasn’t to EnerPHit levels – probably for good reasons – the economics probably didn’t stack up. I would have liked to have known more, including how the thermal bridges were dealt with on this project. 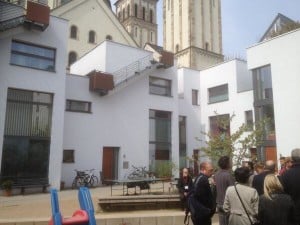 The final scheme was the most impressive one for me. A newbuild project of 10 family houses built in a 3 sided part of a quadrangle, with the middle communal area being a playground – offering a very safe environment for the kids. It had very smartly designed fenestration and for privacy the flat roof gardens were staggered in such a way that inhabitants didn’t overlook each other. It was essentially a co-housing scheme, each house was owned individually but the project had been initiated by the 10 families grouping together. It was very impressive and built to a very high quality. I’d move there tomorrow!

Meeting the international community was as brilliant as ever. I met Russians, Mexicans, Americans and many from all parts of Europe. I even met one nice man who wants to set up a Green Building Store in Vladivostock – watch this space!