Reducing thermal bridging around existing windows
The Cumberworth project already had pre-existing triple glazed windows from Green Building Store, with a whole window Uw value of 0.9 W/m2K, installed in two phases, over the past 6 years.  The clients obviously didn’t want to change the recently-installed windows, so we had to work with them to ensure that our internal wall insulation strategy joined up with the internal window reveals. 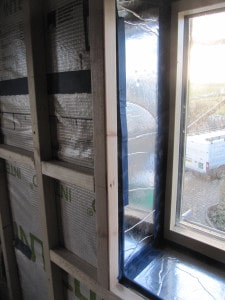 Given the size of the window openings and window frame, you obviously can’t have the same thickness of internal wall insulation running into the reveals. Space-saving insulation products like vacuum insulated panels (VIPs) obviously come into their own in this situation.

VIPs panels offer a solution for insulating around existing windows and can also offer a solution if you are replacing windows but need to maintain the size of your window openings. If you were replacing windows with thicker frames it would reduce the light entering the building, so VIPs could offer a space saving solution in that situation too.  The window openings on the Cumberworth project can be quite small, as it is a barn conversion project, so the VIPS  panels also helps us maximise light.

The make-up of the window reveals at the Cumberworth project are slightly different for both wall types (eg the  solid walls in the barn and the cavity wall in the newer extension)  but the principle is the same in both.  We parged the masonry in the reveals for windtightness, using a sand and cement mix. Then we glued (using a suitable proprietary adhesive) a 10mm thick Kevothermal VIPs panel on top and then placed 9.5mm of plasterboard on top. At the bottom of the reveal we then added a standard timber window board. 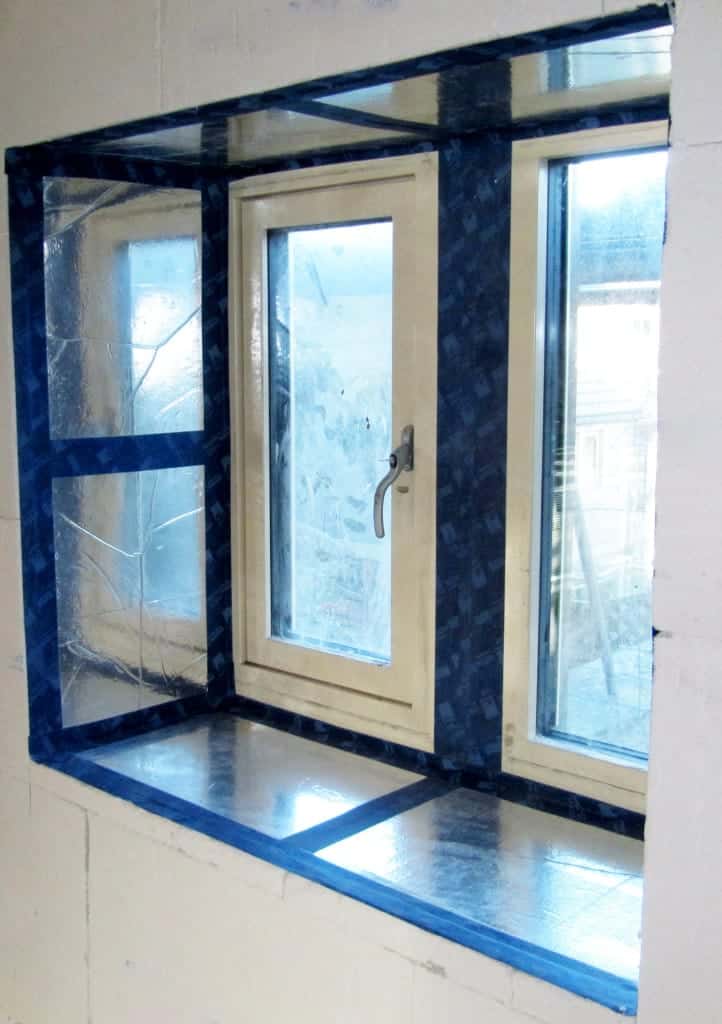 The maximum thickness we could use for the VIPs was 10mm, because by the time you put 9.5 mm plasterboard on top, that was the amount of space we had left to play with without interfering with the window opener.

The lamda value of the Kevothermal  VIPs panel is 0.007W/mK, which is three times better than polyurethane at this given thickness,  Using the space-saving VIPs panels means we’ve got a better continuity of insulation and U value. This helps the insulation run continuously from the window through to the internal wall insulation, thus alleviating the problem of a cold bridge.  If we didn’t insulate the reveals in this way, there would be substantial problems of mould and condensation.

Initially there was an idea to bring the Intello up to the window frame and then put the VIPs on top of it, but this would have been the wrong order. The Intello membrane would be cold in the reveals and any humid air could have caused interstitial condensation on top of it. To avoid this, the airtightness barrier/ vapour control needed to be on top of the insulation.

The advantage of using the vacuum insulated panel (VIPs) insulation system is obviously its space-saving qualities. One disadvantage of this system is that the building team have to ensure that they do not puncture the VIPs panel during installation. In this case, the building team found working with them straightforward. Obviously our clients are aware of where the VIPs panels are located, but future homeowners will need to be made aware of the location of the VIPs panels to avoid inadvertently puncturing them.

I think we’ve done the best we can to ensure continuity of insulation and integrate the existing windows with the IWI strategy. This offers a good illustration of the need for a ‘whole house plan’, that we talked about in our Warmer Homes project. Even if you do energy efficiency measures in stages (eg install triple glazing before internal wall insulation) they can all join together eventually, if you plan things carefully.

In the next blog we’ll be looking at the ground floor and intermediate floor strategy at the project.