On a not so sunny Wednesday morning, I ventured up to what has to be the most impressive setting for a #PensionPower training to date. At the end of a country lane and sandwiched in between rolling hills, the offices of low energy and Passivhaus building pioneers Green Building Store. 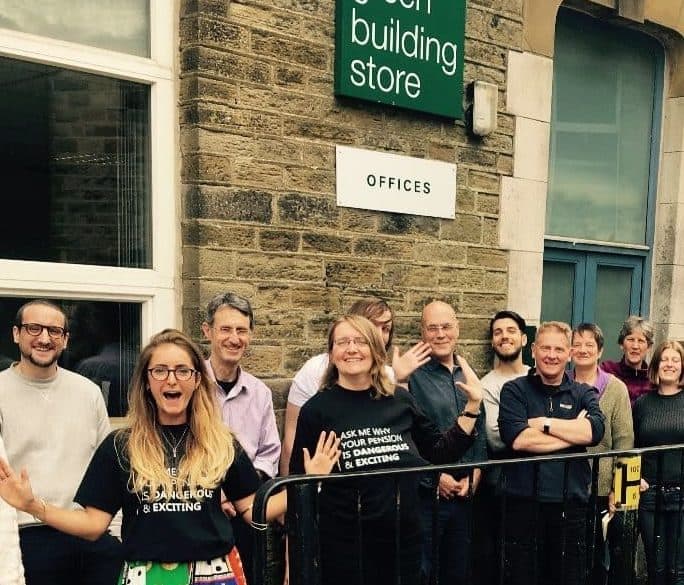 My mission was simple – to try and get employees of Green Building Store excited about their pension. A daunting task, but one that we’ve been doing for some time now at ShareAction for a very good reason. Every month, millions of us pay a bit of our salary into a pension scheme. And as the governments auto-enrolment plans continue, this number is only set to increase. People are being signed up for workplace pensions and providing money that will be invested on their behalf. The people investing that money hope that it will make a good return so that it can be given back as a pension when they retire.

All sounds simple, and pretty dry so far.

But the reason I had rocked up and gate-crashed lunchtime, was to give a brief presentation on the impact our retirements savings can have. Where does all that money go? Which companies do we, as savers, have a share in and are they the companies we would choose if we had a say? And importantly, are the people managing our savings on our behalf doing it in a responsible way?

Our #PensionPower work aims to highlight these issues, and help to put people in touch with their money and to influence the way it is invested. While being a responsible investor encompasses a range of environmental, social and governance issues, the focus of the meeting was to consider the link between pensions and climate change. Confused? That’s often the initial response when I explain why I’m wearing a t-shirt that says “ask me why your pension is dangerous and exciting” but increasingly, people are making the link. As pensions are invested in the companies that make up the major indexes such as the FTSE 100, much of it will be invested in carbon intensive industries. And while many people might have ethical objections to this, the financial arguments also stack up to mean that this is an issue pension providers should be considering.

Since the Paris Agreement in 2015 signalled the global intention to keep temperature rises well below 2 degrees, research has come in thick and fast on the financial impact this will have on investments. In particular, long-term investments such as those held by pension funds, which some figures suggest could reduce by as much as 45% in value if steps aren’t taken to manage the financial risks associated with climate change.

So with only half an hour to convince the people in the room that it was worth listening to me talk about pensions rather than enjoy the beautiful views on their lunch break, we got straight down to business. Green Building Store has chosen the People’s Pension as their provider; a defined contribution master-trust scheme (apologies for the pension jargon!) which basically means that 1) lots of different employers pay money into it and all the money is managed collectively as one big pot and 2) the members paying into the scheme are not guaranteed a set amount when they retire – how much they get depends on how well the investments perform.

And there’s the hook! If pension providers don’t take steps now to mitigate against the financial risks associated with climate change, members are the ones who bear the risk.

During the meeting we got into the detail of the scheme, a breakdown of the types of choices members have and what that means in terms of where the money is invested. We looked at the power players – who is it that makes the decisions? We also looked at the legal duty those people have to manage our retirement savings in a way that takes account of any financial risks. This led to a discussion of the work that ShareAction have teamed up with ClientEarth on – looking at the legal duties to take these kinds of risks into account, and the consequences for pension providers that don’t.

ShareAction have been working with ClientEarth for over a year now, supporting members who want to engage with their pension provider on this issue – reminding them of their legal duties and highlighting why it is so important that they take climate risks into account. As a first step, teams of savers in different pension schemes have written to the decision-makers asking what concrete steps they’re taking to protect their savings, and suggesting possible steps to those who are still ignoring the risks.

However, it’s not all doom and gloom. The shift to a low-carbon economy holds many potential opportunities as well as risks. Increasingly, we’ve seen climate savvy pension funds latch onto these, choosing to invest in things such as wind and solar power projects. While there is no set answer to how pension funds manage climate risk and it is up to them to set the investment strategy, it is imperative that it is considered alongside all the other risks being managed.

The meeting went well – people in the room were engaged and on a few occasions angry (the good kind of anger that can be positively channelled!) As well as individual enthusiasm, as an employer Green Building Store was also keen to be able to provide a pension in line with the business’ aims of promoting best practice in low carbon construction.

Over 20 members of staff have agreed to get together and write a letter to the People’s Pension highlighting the legal duty to take account of these risks, and hopefully this will be just the beginning of a fruitful relationship that will allow members to have a positive influence over their money. As it’s our money and our planet, why wouldn’t we want to!