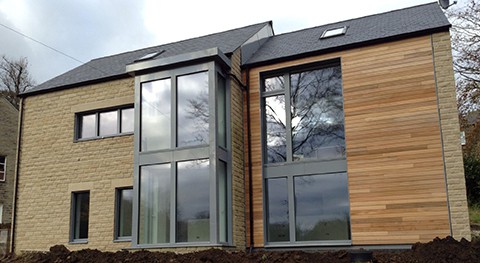 In this blog we are looking at aspects of the Golcar build that are different to those of our previous cavity wall Passivhaus at Denby Dale. For this reason we haven’t covered topics such as detailing for intermediate floors, which were exactly the same as at Denby Dale. However our approach to the MVHR systems and heating has been different, drawing on the lessons learnt from Denby Dale. 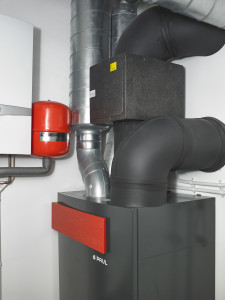 At Denby Dale the heating and MVHR systems were connected through the use of a duct heater on the supply air, heating up the air coming into the building. However we found that this was quite difficult to control so at Golcar we decided to simplify things by separating the functioning of the MVHR system and heating system completely. The central heating boiler and MVHR unit are both located in the upstairs plant room but work completely independently.

As at Denby Dale, we are using a Vaillant EcoTec gas boiler at the Golcar project but have developed a very different heating system design.  At Denby Dale we had a very small amount of (water) volume in the central heating system (just one radiator and 2 towel rails) which caused quite a lot of problems in the first year with the boiler ‘cycling’ and switching itself on and off repeatedly and causing overheating.

It can take a long time to sort out any heating issues in a Passivhaus. We have found with all three of our projects that, because of the ‘cave like’ effect of Passivhaus buildings, it can take a long time  for them to warm up and cool down. It can be quite difficult to try to fine balance a system because the response time of the building is so slow. This can makes it hard to monitor, leading to delays in trying to address the problem. We’re hoping our solution at Golcar will make things simpler this time around. 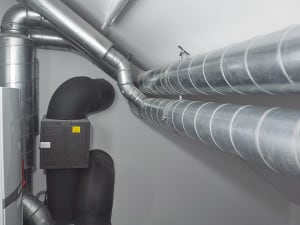 In terms of MVHR systems and design, we are using the PAUL Novus 300 system with rigid steel ducting again. Most of the ducting is concealed but a small proportion is visible in one of the hallways. It has been a straightforward project, very well designed by the MVHR team and installed by the GBC building team.

With the scaffolding down now, the PROGRESSION windows and doors at the project are looking great and we have had much positive feedback at the Passivhaus open days. The cavity closers we have developed for the project look good too and offer a neater solution than those we used at Denby Dale.

Getting better all the time: Airtightness test

We’re really pleased with the result, which shows that the building team have now got Passivhaus completely under their skin. I’m sure I’ve had to visit Golcar far less than any of our other projects, even though it’s only a mile from the office. The reason that I didn’t need to visit so often was that I had complete confidence that they’ve got it  and not only have they got but they’ve got it better than I have! 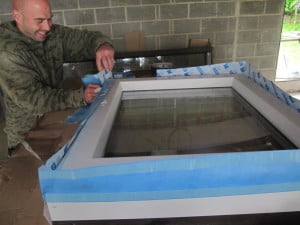 For example the building team were trying out some  taping methods,  which I questioned but they knew were going to work . One of the things we did on this job was to separate the taping procedure from the plastering trade so we stuck tape to block work using Contega SL instead of plastering it in with Contega FC, as we did at Denby Dale. This meant that when the plastering team arrived airtightness wasn’t an issue, they could just concentrate on doing a good job.

For me the biggest lesson on our journey of building Denby Dale, Stirley Barn and now Golcar is the positive learning process for our building team. This has resulted in a level of competence that allows the design process to be less intense and subsequently cheaper. This lesson could/should be applied to the construction industry as a whole.  Passivhaus levels of build quality can be achieved in a relatively short period given the correct levels of technical and economic resources, and respect for existing experience. Far better building practices are achievable for the UK construction industry, willingness is the key.

The project is now in final stages of construction, completing internal fixings etc.  The next and final blog will cover Passivhaus certification and a final wrap up of the project, with some images of the finished project.