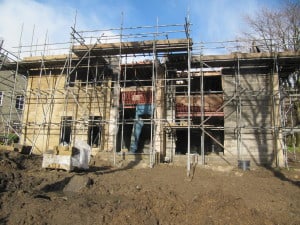 We are already well under way with our latest Passivhaus project – a newbuild cavity wall construction 296 m2 three storey 4 bed house in our neighbouring village Golcar. It is mostly rectangular in form with a small kink in it and a bay window. It follows many of the design details of our first cavity wall Passivhaus – the Denby Dale Passivhaus – but with a few notable differences/ evolutions of the original detailing for Denby Dale.

The design for the house is based on an  original design passed by planning two years ago for clients in our nearby Golcar village. Like the Tunstalls before them, the clients were wanting an ‘eco home’ built in their garden . Initially, they came to us looking for low energy high perfomance windows. During those early discussions we introduced them to the concept of Passivhaus and looked at the original architect drawings. We found that there weren’t many changes needed to the original plans in order to make it Passivhaus, provided we used Denby Dale detailing.

Changes to the original plans
We then  put the designs through PHPP (Passive House Planning Package software) and played around with the different build elements to cost engineer the project, with the only major change to the plans being turning the orientation of the building south, as opposed to the original orientation to the west. We also had to take some of the windows out from the north side but that was about it.

Layout & design
The project will be mostly faced with good Yorkshire stone as at Denby Dale, but with the difference that this is being mixed with  timber cladding on certain aspects and a huge bay window , which is going to look fantastic. There will be a lot of big open plan spaces internally. As the house is being built on a slope, we needed to build a retaining wall away from the house to create a flat piece of land for the construction. The main entrance will be over a bridge / moat (outside the thermal envelope) into the middle floor.  The middle floor will house an open plan kitchen/dining living room and will have views all round over the garden and spectacular views over the Colne Valley. The main bedrooms will be down on the ground floor with access to the garden. Then the third floor (within the warm roof space) will comprise a study, spare bedroom & the plant room for MVHR etc.
Although we are using Denby Dale as our template for this project there are a number of key differences about the Golcar Passivhaus project: 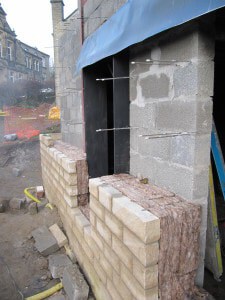 For the Golcar Passivhaus project. the structural engineer specified that we use 140mm inner concrete block leaf due to the large expanse of walls. So in theory at least we have even more ‘thermal mass’ than at Denby Dale, although in reality this will probably make little difference.

Warm roof
Unlike the cold roof at at Denby Dale, this will be more like our Stirley Farm roof, using timber I-beam We are using 3 Fakro quadruple glazed rooflights in the ceiling. The challenge with rooflights in a Passivhaus is that – due to water and wind protection for the roof you can’t wrap them within the insulation or centre them in the insulation layer in the same way as windows & doors. So the installation is always going to be a weak point thermally. But since the house is relatively large we are able to ‘get away with it’, after modelling carefully in PHPP.

No solar space
The Golcar Passivhaus will not have the same large glazed area as at Denby Dale. Because of this we have got away with using the cheaper cavity mineral wool insulation with lesser thermal conductivity  (KnaufDritherm 37 as opposed to the 32 version we needed at Denby Dale).

In the next blog we’ll look at some more similarities and differences beween out two cavity wall Passivhaus projects, including detailing around the ground floor junction.