In the first full year after conversion our gas usage was 65% lower than the 8-year average before conversion.

The ULTRA windows and doors are good quality and very substantial. They look good and everyone who sees them compliments us on them. The tilt and turn mechanism for the windows works well and is easy to use. They are streets ahead of other windows and doors on the market.

The system is very quiet – we don’t hear it at all around the house except faintly at night when the house is quiet.

Having cleaner, filtered air is very important for us as the house is next door to a PVC flooring factory and close to a main road. We use a pollen filter on the incoming air stream to remove as much solid matter as possible from the air.

In 2007 John and Pauline Grayson bought a 1930s 3-bed, ex-council house in Manchester in need of serious work, but with good potential for an energy-efficient conversion and refurbishment. In 2017 the house received EnerPHit certification (the version of Passivhaus for refurbishments) from Mead Consulting. This was after many years of research and mistakes, some of them expensive.

The Graysons made the retrofit work a climate change project and specified it in some detail. The conversion was designed by Andrew Yeats at Ecoarc Architects Limited. Alan Clarke, the project M&E and PHPP consultant, undertook the ventilation, electrical and plumbing layout designs. 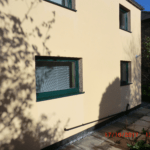 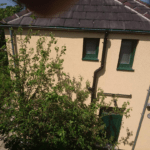 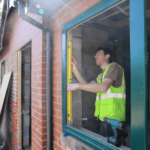 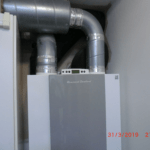 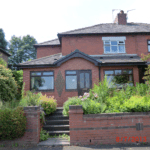 John and Pauline undertook the deep, radical retrofit for a number of reasons:

Wanting to create a comfortable home for their retirement and old age. The retrofit also incorporated accessibility features such as widening doors and making the house wheelchair accessible. John commented: “The current terrible state of the care system in the UK, as a result of under-funding and the impact of Brexit, is such that we wanted to make our house as suitable as possible for our old age so we could stay here as long as is practicable.”

Acting on climate change. “We are very conscious about climate change. Retro-fitting existing buildings plays an important role in tackling climate change and we wanted to show what is possible for a typical old house. We wanted the project to be an exemplar and to play our part in reducing carbon emissions. Working to the EnerPHit standard had an added bonus in ensuring that we have a high quality build – it provided a quality check on the building. After the Government scrapped the Code For Sustainable Homes (“Cut all the ‘green crap” as they called it) in 2015 there are no current British standards for low-energy buildings. The Passivhaus (and EnerPHit for retrofit) low-energy standard serves to fill that void very well.”

As part of other home improvements. “The house needed a new roof, new windows, re-wiring and re-plastering amongst other things, so we undertook our radical retrofit at the same time. Essentially the house was gutted inside and we moved out for 10 months”.

The EnerPHit radical retrofit involved the use of 150mm graphited EPS external wall insulation going down to the foundations, as well as insulation of the 50mm cavities in the external walls. Also, the party wall received a combined acoustic and thermal insulation treatment.

John commented: “Our builders did a great job and had great expertise in airtightness. Green Building Store Directors Chris Herring and Bill Butcher also came to visit us early on when we were researching the project and helped steer us in the right direction on a few aspects, including the insulation and airtightness strategy for the ground floor”.

The Graysons have made the technical details of the project available to others considering undertaking a radical retrofit. They already share their experiences with fellow Carbon Coop members in Manchester by holding open days.

“We originally wanted to have windows with integral, external Venetian blinds for summer shading but we found that they were too expensive and the lead time was too long (13 weeks and rising). We were advised that we wouldn’t have a problem with over-heating anyway. So instead we chose Green Building Store windows because we’d visited them at Heath House Mill and knew that the windows were good quality and suitable for Passivhaus/ EnerPHit projects.”

“The ULTRA windows and doors are good quality and very substantial. They look good and everyone who sees them compliments us on them. The tilt and turn mechanism for the windows works well and is easy to use. They are streets ahead of other windows and doors on the market. By contrast, we got a quotation for double-glazed windows from another company, without any stated U-value, and at a similar price.”

The project has a BRINK Renovent Excellent MVHR system specified by the Graysons and designed by Alan Clarke, with detailed specification and supply by Green Building Store. The system was installed by the builders on the project.

“We chose Green Building Store for the MVHR system because it has a very good reputation for designing MVHR systems. We knew we would get a well-designed and efficient system. It may have cost a bit more than others on the market but we knew we would get a high-quality system. The Brink unit was chosen over other options because it was smaller and fitted the utility room better. The system is very quiet – we don’t hear it at all around the house except faintly at night when the house is quiet.

Even at the lowest fan-speed setting of 75m³ per hour, washing on the suspended rack dries overnight. We set the speed to this rate to reduce wear on the fan bearings. (The fans are the only moving parts in the ventilation system.)

Having cleaner, filtered air is very important for us as the house is next door to a PVC flooring factory and close to a main road. We use a pollen filter on the incoming air stream to remove as much solid matter as possible from the air. This is particularly important for Pauline because she lived in the polluted air of London and travelled to work on the Tube, where the particulates are very bad, for most of her adult life.”

“We have now been back in the house for nearly two years. Although it used to be a cool house, we don’t need to heat it during the summer months: we set the thermostat to 17.5°C and open the upstairs windows at night to cool the house in hot weather. During the winter we set the thermostat to 18.5°C in the early evening to achieve a cool bedroom for sleeping; and to 20°C in the morning to feel comfortable. The temperatures are very stable in all the rooms.

In the first full year after conversion our gas usage was 65% lower than the 8-year average before conversion; the electricity usage was 15% lower, even though we fitted more lights to improve the lighting. The explanation is that we now have a more efficient oven, an induction hob and mainly LED lighting.”

“We are not complacent about what we have done. We are aware that Britain needs to end its reliance on fossil fuels to heat buildings by 2030 (as per the UN Special Report 1.5 in October 2018) as just one part of tackling climate change. This part alone is a huge task and will need a state-funded mass refurbishment programme as well as individual lifestyle changes.

The reason that the main political parties have betrayed the population is not directly because of Brexit itself; it is because they have wasted three years on Brexit when they should have been working out how to tackle climate change, and preserve all life on earth, as a matter of urgency. It will also involve a huge re-prioritisation of all our resources and a re-education exercise that would include treating houses and flats as homes and not just financial investments. Brexit and climate change are closely related in another way: the only way to unite the country after such a divisive three years is around the common main threat of climate change.

For our part we intend to install a PV array on the south roof, for which our consumer unit has spare capacity; and we already have a cable sealed into the loft to carry the electricity generated. We will heat our hot water with any spare electricity generated. We will also investigate the feasibility of installing a heat-pump. Both of these measures are mainly effective from spring to autumn. It needs new Government programmes to provide renewable energy for the winters”.

If you have any questions or require further information on the project, please email [email protected]