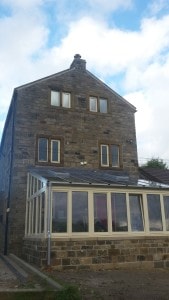 We’re really pleased with how our Cumberworth project has gone. Energy consumption, as modelled in PHPP, has gone down somewhere in the region of 80-90%. The airtightness has radically improved –  from 17 air changes per hour to 2.

Our clients are loving being back in their warm and cosy ‘new’ home. It looks lovely too, especially with the addition of the new conservatory (outside the thermal envelope) adding extra light and space. 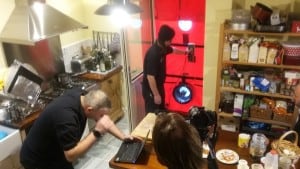 When we embarked on this project we committed to getting the air changes down to 3 ach/ hour. We had an airtightness blower door test recently and it came in at 2.5 air changes/ hour @ 50 Pascals. We went around the house with a thermal imaging camera we found that there were two areas that were a problem although otherwise the house was extremely airtight. 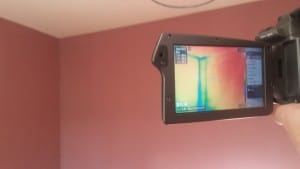 Another area we should have looked at was the airtightness around the floor joists going into the partition wall on the two floors. We could have taped the joists with Tescon No 1 tape to the parged walls OR we could have chopped off the joists and used wall plates (as we did at the Denby Dale Passivhaus) and hung the joists off them.

As we develop our understanding of radical low energy retrofits we are on a steep learning curve and learning on each project. We are becoming more and more perfectionist and any air leaks now feel disappointing so I am kicking myself about the partition wall as we should have been able to foresee the problem.

I think we took our eye off the ball because we were focusing our attention more on the moisture and IWI issues. So..it’s a lesson… We are unable to remedy the issue at this stage as it would be too intrusive and too costly and perhaps unnecessary. 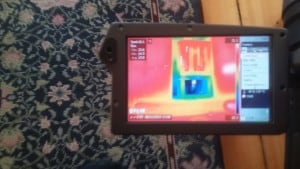 Fortunately the second issue was something that we could address.

When I teach on the CarbonLite CEPH course we always stress the importance of scepticism regarding manufacturers’ claims but unfortunately on this occasion I didn’t follow my own advice.

We chose a wood burning stove for the project that was marketed and labelled as ‘Passive’, with only a very small heat output of 4KW, which is what was needed. It had an external air supply which led us to believe the stove was room-sealed. But actually when we did the airtightness test it was leaking the equivalent of up to 0.5 air changes an hour. When we disengaged the stove, flue and supply pipe, and re-did the air test the results came in at 2 ach/ hour, rather than the 2.5 ach/ hour with the stove.

To remedy this we put a call-out on Twitter asking our colleagues in the Passivhaus community for alternative options. Two alternatives were suggested. The Rika Passivhaus stove is airtight and has been installed at the Acomb project in York. The Morso S11 stove also can be suitably airtight, but only after adaptations to the airflow control, and has been used on an EcoArc Passivhaus project in Cumbria.

We have managed to get a full refund on the original stove but we do feel that it is being mis-sold , due perhaps to lack of understanding about Passivhaus. We subsequently found a reference to its lack of airtightness in the stove’s installation instructions, so they’d obviously come across the problem, but this has not transferred over to their marketing department.

We have chosen to replace it with the Morso S11 because it fitted in the aperture that we’d built. The Rika was too big and we’d have had to do a lot of building work to fit it in. The Morso S11 has actually turned out cheaper than the original stove!

Given the many challenges at the house, we had assumed that the retrofit would never reach the EnerPHit standard. As we weren’t going for certification, our initial PHPP modelling only used assumptions and educated guesses for Psi values (edge losses). The modelling in PHPP suggested that, once improved, the space heating need will be in the region of 65 kWh/m2/ year. This contrasted with the space heating need of the original house , which would be in the region of 497 kWh/m2/year, assuming that the house was heated at a steady 20 degrees in the winter. So the space heating need is looking like an 86% improvement!

The end result is wonderful – a warm and comfortable home for our clients with better airtightness than we originally thought we’d achieve. Congratulations to Jude and all the team for doing such a great job and also a massive thanks to our wonderful clients Sue and Paul for allowing us to try out a ‘whole house’ radical retrofit with a number of new IWI techniques and materials. We will be sharing updates of the ongoing HydroTrac moisture level monitoring and post-occupancy monitoring of the building. Watch this space!