Bill and Jude and the rest of the wonderful Green Building Company team took on a 250-year-old barn conversion for us and though constrained by listed building criteria managed to create a home that uses just a fraction of the energy of our previous dwelling. 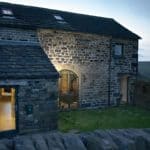 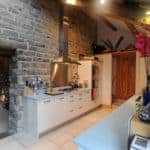 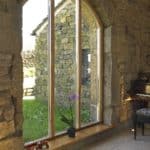 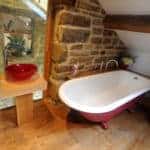 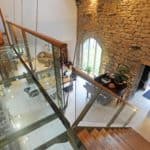 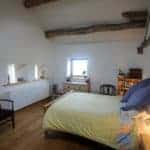 Listed Buildings control was anxious that the building would be preserved in its original state and appearance, so when the walls had to be extensively rebuilt Green Building Company adhered closely to original photographs to ensure accurate conservation of the stonework. Yorkshire slate tiles for the roof were re-used and more had to be acquired to fit in with the existing ones.
As well as preserving the barn’s original structure intact, Green Building Company undertook a series of insulation measures, which enabled the building to achieve insulation levels at above Building Regulations. A U value of 0.16 was achieved in the traditional trussed roof, while also maintaining the existing roofline and keeping the oak trusses visible.
A pragmatic approach was taken to the choice of insulating materials in the roof, balancing cost and environmental concerns. Immediately underneath the slates, a breathable sarking board made from woodchip (from Natural Building Technologies) was used to create a first layer of breathable insulation. The next layer was 100mm Rockwool insulation – chosen as a cost-effective option, followed by a continuous vapour barrier to prevent water vapour damaging the roof membrane. Lastly, a 45mm layer of polyurethane-backed plasterboard was installed. Polyurethane insulation offers a dense effective insulation, where space is at a premium. With the roof level heightened slightly and by using this insulation combination, the oak trusses in the roof were still able to be visible helping to conserve the building’s original characteristics.
Additional insulation measures in the building included used of polyurethane-backed board on external walls and use of Green Building Store’s ultra-efficient Ecoplus FSC certified windows and doors throughout (NB: Ecoplus has since been superseded by our PERFORMANCE range).

Customers John & Cate Clark said:
“Bill and Jude and the rest of the wonderful Green Building Company team took on a 250-year-old barn conversion for us and though constrained by listed building criteria managed to create a home that uses just a fraction of the energy of our previous dwelling. Most of the gains are down to good airtightness, not least in their Ecoplus wooden windows and to high standards of insulation – and all without detracting from the original ‘character’ of the historic building”.

As well as replacing an existing pre-fab garage (with one made from reclaimed stones more in keeping with the property), Green Building Company was involved in the construction of two new underground garages. The purpose of building them underground was to minimise the impact of any new buildings on the site and to ensure that the visual impact of the garages was minimal. The ground was excavated to create underground space for the garages and a tanking system is used to encase the reinforced concrete double garages. Over the garages wild flowers such as bilberries and heather have been scattered. The new garages cannot be seen from the road, and pre-existing shape of the land has been preserved.

The renovation of a 3 bedroom house combining highest levels of preservation of existing Grade II dwellings with a pragmatic and effective approach to insulation.